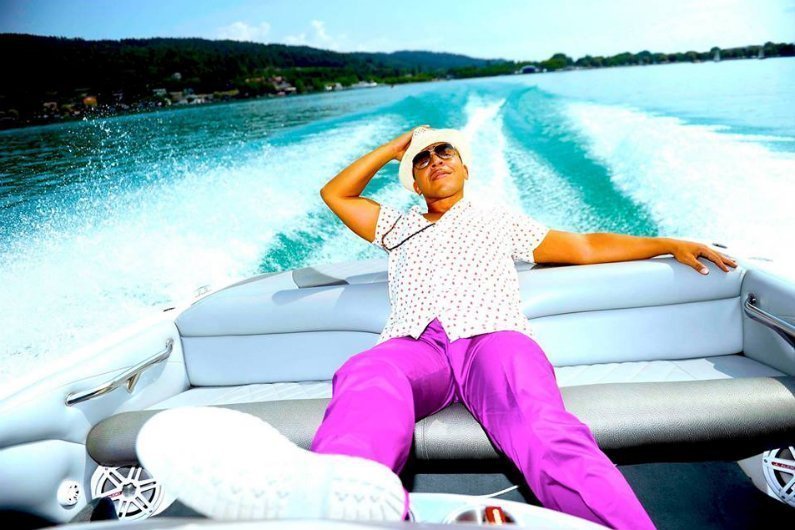 “Mambo No. 5” is one of the most recognizable songs released in the last 20 years. In the fifteen years since Lou Bega's timeless hit, America hasn't heard much from him. That said, it would be unwise to label Bega a one-hit wonder, as he's scored a handful of international hits. Bega recently made the move back to America, and is getting ready to take the country by storm again. We reached out to Lou to talk about his life nowadays, his success, and what he’s planning for the future.

After “Mambo No. 5” hit number one in many countries, you were nominated for a Grammy, appeared on a ton of big TV shows, and toured with Cher. How did your life change?

My life changed dramatically, of course. I was a struggling songwriter barely making it before, and after I became a globetrotter known on a planetary scale. Suddenly you get what you have always strived for: playing in posh venues, meeting interesting people. The best part is making people happy.

VH1 had you on their list of the 40 Greatest One-Hit Wonders Of The '90s. However, in addition to “Mambo No. 5,” you’ve had 8 other songs chart. Does getting called a one-hit wonder get under your skin?

Different countries have different chart positioning. For example, I have four top 10 hits in France and only one in the US. Karaoke singers in the Philippines prefer my song “Angelina” to "Mambo No. 5." The world is much more complex than country chart positions can show.

You’ve said in interviews that the girls you named in “Mambo No. 5” are real girls from your past. Did those girls ever reach out to you after the song's success, and if so, what were their reactions?

I must admit that most of the ladies mentioned in the song had only spent hours with me. Since family names weren’t said to the public, no one felt compromised or betrayed. No child support claims have reached me!

You were raised in Munich, and you have Italian and Ugandan roots. How did you get into making Latin music?

I started out as a songwriter in the late '80s. I then tested the waters in different fields and genres such as reggae, blues, hip hop, playing in bands, and even releasing records under different aliases.

In the mid 90s, I spent about 16 months in Miami which made my love and understanding for Latin music grow quite intensely. Back in Germany, all I needed to do was to combine my artist persona with the classical form of mambo and something new was formed.

Recently you’ve gotten married and settled down in California. What are the differences between being a celebrity living in Europe and one living in the United States?

Oh yes, Elvis got us married in Vegas. It was spontaneous and we felt a bit like the crazy youngsters we once were and... wait a minute, still are sometimes. Always loved California (I consider myself a palm tree / open shirt / ice cream licking / hat wearing summer dude), and if I really get to miss winter one day, I'll hop on a plane and go back to Germany. Our winters are pretty long and dark.

I know you're a supporter of the German soccer team. Were you watching the 7-1 pummeling of Brazil? What was your reaction?

We were shocked. We knew the team was strong, but 7 goals at a World Cup was unheard of. The whole country is in a frenzy. We are the champions.

What’s different about the music industry now and when you were coming up?

A lot has changed. My coming out time was probably the last real selling period. The internet was just about to get started for the average household. No YouTube, no iTunes, and no Zumic.com! It's very hard describing it to someone who wasn't around.

What artists, past or present, would you most like to work with?

Bob Marley, Perez Prado and his band, Xavier Cugat, and Pharrell Williams because of his versatility.

Other than recording and performing, what hobbies do you have?

What’s the best advice you’ve ever received and from whom?

Two different pieces of advice from two different people really made it for me. My mother's advice was: "Clean up your thoughts and wishes, and give them wings to fly as they will become manifested in the real world." So it was and still is.

The second advice came from a philosopher I befriended, who simply states that, "Change is your ally and not your opponent, as the universe loves when you take risks in your every day life." That's what I am trying to live like, and I ain't talking about jumping from skyscrapers.

What have you been working on, and what’s coming up for you?

I am sitting in a Swiss hotel while I answer these questions. My life is all about playing music on an international level. These last years, I was heavily focused on Europe and Asia.

Now I am setting up a Bega band in the States, and bringing my Mambo universe to the people of the American continent, plus working on new material and firing out collaborations. I call it my "hello again" phase in Canada, USA, and of course South America, where I always had great fun. See you soon!