Earlier today, The 1975 dropped by NPR to perform a quick Tiny Desk concert. Frontman Matthew Healy performed alone, with only his acoustic guitar to compliment his vocals. He started by playing "Sex" and then "Chocolate," two singles from his band's self-titled debut album. He followed these with a performance of "Woman," which comes from their very first release, an EP called Facedown. Though known for showy electronic rock, Healy was able to strip the songs down and make them soft and melancholy. It's an intimate performance that offers a new perspective on the band's normally upbeat songs. If you like what you hear, you can download audio of the three live songs.

The 1975's self-titled debut album just came out a week ago, and is available on iTunes now. You can also find a 39 track deluxe edition, which includes the band's 4 EPs that came out before the album was ready. 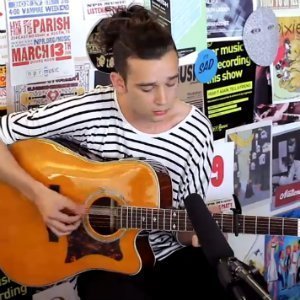 The 1975 Add 2019 Tour Dates: Ticket Presale Code & On-Sale Info
Tickets Alt Rock Indie Pop The 1975
3
7129
Back to top
You must be logged in to upvote.
Registration and login will only work if you allow cookies. Please check your settings and try again.