This has been a terrible couple of weeks for the city of Detroit. The city went bankrupt, salaries are being cut, special measures are being put in place, and the bankruptcy trial is beginning.

In response, and because it was a stop on her The Mrs. Carter World Tour, Queen Bey visited the people of Detroit to show her support for the city and its citizens. She sang a special number that night, "A Change Is Gonna Come" by Sam Cooke. She began, "This song is dedicated to Detroit."

A couple of days ago, a music video of the cover featuring Bey's performance in Detroit surfaced on her YouTube channel. The black and white video, featuring pictures of famous people and places in Detroit, is truly touching. Beyonce sings Cooke's song beautifully, and watching it I literally had goosebumps going up my arms.

Take a look at the video for yourself above, and cross your fingers that change really will come for Detroit. "It's been a long time coming."

All hail the Queen. 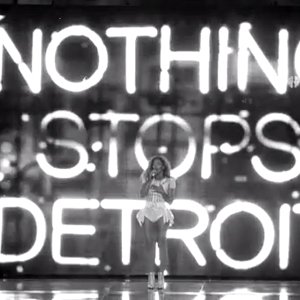 "Walk On Water"
Eminem ft Beyoncé (YouTube)
Music Hip Hop Beyoncé Eminem Detroit, MI
4
1731
Back to top
You must be logged in to upvote things.
Registration and login will only work if you allow cookies. Please check your settings and try again.