On Saturday, Kendrick Lamar and ScHoolboy Q performed at Power 105.1's annual "Powerhouse" concert at Barclays Center. Before the show, the pair (along with fellow TDE member Jay Rock), appeared on the radio station's "Breakfast Club" segment for a joint interview with A$AP Mob members Rocky and Ferg.

In this East meets West interview, the rappers were all quick to emphasize the fact that their camaraderie persists despite the dual factors of hip-hop's history of regional conflicts and Lamar's inflammatory "Control" verse. Rocky in particular voiced a deep admiration for Q, recounting how he re-wrote his verse for their collaborative track "Brand New Guy" "'cuz his shit was hotter." All five rappers' attempts to dispel rumors of a bi-coastal feud were admirable in the face of hosts who were clearly trying to stir the pot.

Once TDE and A$AP Mob got past that initial hurdle, they fielded questions that were slightly more substantive. Q and Jay Rock were asked how they felt about their group frequently being called "Kendrick Lamar and the Black Hippys," to which Q responded, "Fuck that... I know he's the biggest rapper, but I'm not signed to . That's my homie." 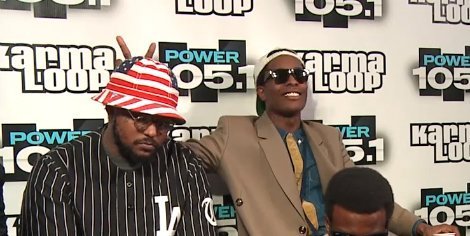 Rocky hogged the mic for most of the interview, extensively big-upping Ferg and making it clear that the purpose of his music is not to please fans, but to be "art." Ever the class clown, Rocky cheekily threw up bunny ears behind Q's head at one point, and threatened to give host Charlemagne a noogie.

Also of note was the entire interview's terrible sound quality, with every mic sounding terribly hot and distorted. Power 105.1, please step your game up.

Check out the full interview above, and watch A$AP Mob and TDE's respective cyphers from this year's BET Awards. 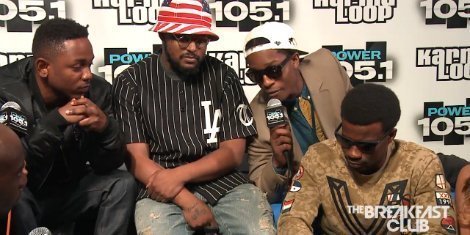