Fay Milton spoke with Pitchfork about how comfortable it was working with Mr. Hostile:

He knows the band inside out... You save so much time not having to explain anything when you work with someone who knows you so well.

In the same Pitchfork interview, singer Jehnny Beth spoke about how American rock band Swans influenced played a part in the album's lyrics:

There was a moment when we saw Swans, and it really started to shape what I wanted to say on the record lyrically. There will definitely be things like "I Need Something New," where you can hear Swans’ influence on the music — and I’m saying that humbly because there’s no way we’re matching that, especially right now. They’re one of the best bands ever. Live, they go beyond any kind of sound you can hear from any band at the moment.

Adore Life is an intense album that draws you in with hypnotic rhythms and raw power. The drum and bass foundation is a great springboard for Beth's vocals and Thompson's guitar to go out on explorations of sounds we didn't hear on the band's debut album, Silence Yourself.

Adore Life is available on Amazon (CD, MP3). You can also stream the full album above, via Spotify.

For the latest music, news, and tour dates from Savages, check out their Zumic artist page. 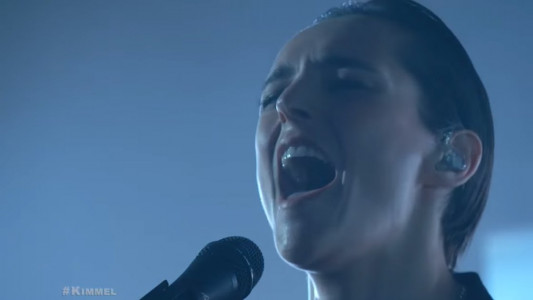 Savages' Jimmy Kimmel Live Performance on Jan 20, 2016 [YouTube O...
Music Film/TV Soundtrack jimmy kimmel Savages Los Angeles, CA Live Performance (Video) London, UK
1
962
Back to top
You must be logged in to upvote.
Registration and login will only work if you allow cookies. Please check your settings and try again.