Action Bronson and producer Party Supplies released their second collaborative mixtape, Blue Chips 2, earlier this month. Now, Complex has premiered an "Unplugged Session" (a spoof of MTV's series of the same name from the '90s) of the pair performing mixtape cut "Amadu Diablo."

Whereas the track's studio version heavily samples Tracy Chapman's "Give Me One Reason," this video has Party Supplies playing the song's simple acoustic guitar part live, with Bronson occasionally reaching over to mute the guitar so he can rap a cappella. The duo smoke a fat doobie throughout the video, and clown around quite a bit, belting out Chapman's chorus and even jamming on Tom Petty's "Free Fallin'" at the video's end. It's hilarious, and it makes us wish they'd do a full performance of Blue Chips 2 in the "Unplugged" style.

You can stream and download Blue Chips 2 right here on Zumic. 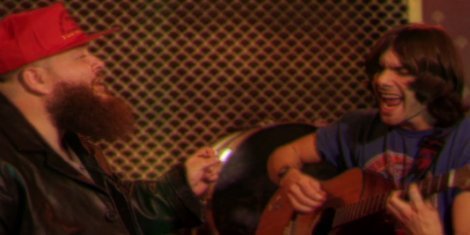