3Teeth hit hard and heavy on their new song "American Landfill."  Listen above on YouTube.

The menacing track opens with a brief audio clip of a person saying, "You're gonna buy American next time," before a wash of heavy guitars and drums punishes your eardrums.  Swirling production creates an eerie vibe as aggressive vocals criticize modern times with lyrics, "One great hole / Decomposing / Layers of souls / Processed control / American Landfill."  In a statement shared with Revolver, singer Alexis Mincolla says the song is supposed to create the feeling of "getting buried under the ruin of a fallen empire."

The song will be on the group's upcoming album Metawar, which is scheduled for release on July 5, 2019.  Pick it up on Amazon.

You can catch the group in Europe opening for Ministry in June and July.  For concert tickets and more, check out the 3Teeth Zumic artist page. 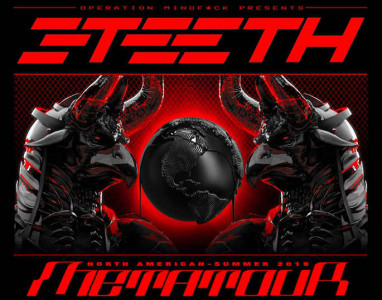