Win Butler and Jeremy Gara of Arcade Fire sat down with CBC Radio's Jian Ghomeshi for a 34 minute interview on the Q program. It's an intimate and personal conversation that is a must listen for Arcade Fire fans.

It's a very insightful interview, as Win and Jeremy talk about the technical elements of making their new album Reflektor with Haitian and Jamaican music influences. They also talk about looking up to bands like Nirvana, The Cure, New Order, Talking Heads, The Clash, and The Police when they were younger. These forces of Caribbean music and rock music combine on the latest album for something fresh and interesting.

Win Butler revealed that the idea of Reflektor came when he was reading Søren Kierkegaard's book The Present Age. Deep philosphical stuff.

They also discussed the pitfalls of fame and success in the music industry. Arcade Fire have built themselves on being weird and insulated, and take pride in the fact that they've maintained their integrity even after becoming hugely popular and winning a Grammy award for their last album, The Suburbs.

At one point, the conversation drifts toward the marketing of the new record. The infamous Reflektor chalk drawings were the first way that Reflektor reached public consciousness, and drummer Jeremy Gara explains how the band was involved in that process.

Details about the David Bowie collaboration on the song "Reflektor" were shared, as well. Win said that he sent a demo of the song to Bowie and formally pitched him on working together in the studio. The idea that Bowie randomly dropped by the studio is "just an NME misquote" according to Win. The "down, down, down" line that Bowie sings in "Reflektor" are a direct reference to his song "Fame" that was written and recorded with John Lennon at the same studio where he was working with Arcade Fire.

To wrap things up, they talked about what success meant to them at this point in their careers. 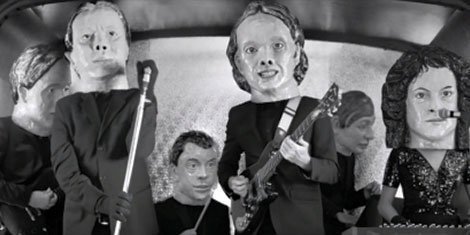 "Signs of Life" - Arcade Fire [YouTube Music Video]
Music Rock Arcade Fire Official Music Video
1
858
Back to top
You must be logged in to upvote things.
Registration and login will only work if you allow cookies. Please check your settings and try again.