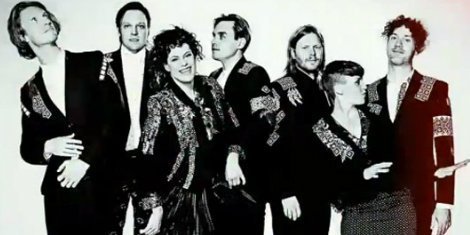 In a recent interview with The Hollywood Reporter, Arcade Fire's management discussed the promotional plan leading up to the release of Reflektor. Scott Rodger (manager), Steve Martin (publicist) and Karen Glauber (radio development) explain their roles and the importance of this "nontraditional" promotional campaign.

For Arcade Fire and their management this wasn't just about promoting an album, it was about ensuring that fans and potential fans would know and remember that a new material was on the way. In addition to the Relfektor campaign and 9pm debut of "Reflektor" on Septemeber 9, their performance on top of the Capitol Records tower and 30-minute special following their performance on Saturday Night Live were an essential aspect of the promotion.

The band also allowed one writer (David Fricke of Rolling Stone) to review the album. Explaining the logic, Martin said, "If there's only one review out there and it's a rave, and the Internet mob links back to and quotes that one review, is that worth more than 100 reviews where some are Cs and two stars, and others that are, like, 'This is a bold new direction'?"

Obviously this strategy was successful because Reflektor sold 140,000 albums in it's first week. The creative promotional campaign was not just about selling records Rodger explained, "these guys want to break new boundaries and experiment ... I think all they're trying to do is move forward. And I think they have achieved it with this new record."

Reflektor is available in vinyl, CD and mp3 form via the official Arcade Fire store.