Last night, Arcade Fire played a special show at Capitol Records in Los Angeles that was simulcast by KCRW / NPR Music. A really great performance, as the band is clearly more comfortable with their new material than they were for their big Saturday Night Live performance and subsequent NBC special that aired afterward.

The band is grooving really hard throughout the set comprised entirely of Reflektor songs. They also worked in a couple Lou Reed teases bookending "Supersymmetry" in honor of the late rocker's passing.

Win Butler kicks things off with some funny banter, saying "Be afraid, be very afraid... for Halloween is almost here... Are we on the air? We're on the air! Hello liberal America... and the southernmost part of Canada..." 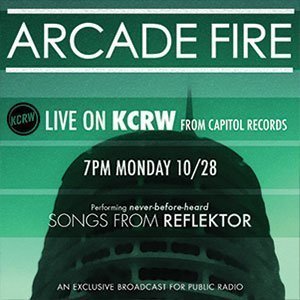