Arcade Fire has come under fire from some established musicians and even fans lately for over-promoting their album Reflektor. However, it must be said that frontman Win Butler is a fantastic interview. Most recently he sat down with Rainn Wilson, best known as Dwight Schrute from television's The Office, in a psychedelic van for a segment called Metaphysical Milkshake. Watch above.

The 9 minute interview covers a lot of ground. Things start off a little weird, but quickly settle into a groove as Butler talks about Haiti and Haitian music like Kompa. He explains rah-rah music as African drums and horns playing complex rhythmic patterns and one of his favorite bands, which has all female members and plays "a super duper raw version" of what MIA does. He also talks about when he started playing impromptu concerts for Haitian locals while he was on vacation there with Arcade Fire bandmate Régine Chassagne.

This leads to some really interesting discussion about cultural exchanges between African, Caribbean, American, and European musicians and how Paul Simon, the banjo, blues, and The Smiths are all intertwined. As Butler says, "the thing about music is that it exists in the air. There's no international boundaries. If you're an artist, I don't think that you're supposed to be a co-defined thing, into these weird cultural boxes... it's really absurd and it's a really anti-artistic way of thinking."

There's a funny moment when Rainn Wilson calls out Arcade Fire's latest album as "weird Euro watered down disco" in a very light-hearted way. This leads to a discussion about how each Arcade Fire album stands on its own as a unique work of art that is conceptual in the way that films can be conceptual works of art.

Butler reveals that his favorite albums by other artists are Radiohead's The Bands, OK Computer, and Kid A, as well as The Cure's Disintegration, and Neil Young's After The Goldrush.

When asked about the best advice he's ever received, Win shares a story of having dinner with Neil Young while working on the Reflektor album. Neil Young told them, "Have fun making your album... or it can not be fun at all. That's fine, too." Which leads to an interesting discussion about the creative process and conflict.

Check out the video at the Soul Pancake YouTube Channel and leave a comment with albums that have affected you as a human being. Far out.

For the latest Arcade Fire music, news, and tour dates, check out their Zumic artist page. 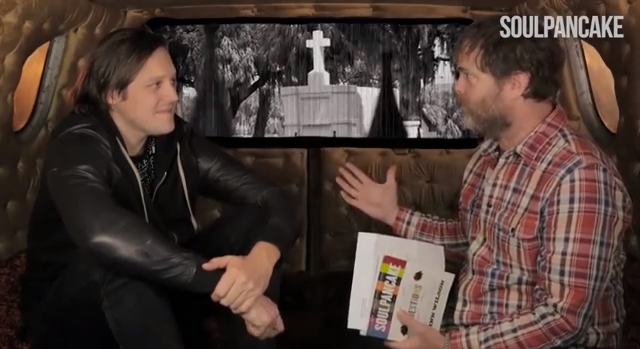