Somewhere in Los Angeles there's a place called "Fais Do-Do" that's part café and part club, right off route 10 halfway between the 405 and the 110. Last night, the venue was turned into "Club Amok" for an Atoms For Peace "Secret Show".

Watching YouTube videos is really fun. Thom Yorke and Flea form the basis of a band that go really deep into the music and give everything they have. You can see it in their wild movement and dancing on stage, but you can also hear it in their sound. It's great that two artists who have been at the top of the rock world for 20 years trying new things and being unpredictable. Here are some of the highlights from what's come out on YouTube so far. Hopefully they'll release a DVD at some point with high quality audio & video.

"Dropped" (with especially crazy dancing from Yorke and Flea):

"The Present Tense" (During the encore. Thom Yorke completely stops playing and says "Who the fuck is talking? ... Talk when I'm fucking done!" at 1:20 which is pretty awesome):

"Rabbit In Your Headlights" (big crowd reaction for the U.N.K.L.E. tune that Yorke collaborated on, and final song of the show):

At one point during the 2nd song "Unless", Yorke says to the audience: "This is rehearsal, right?" as you can see he's still a little unsure of exactly how to perform the challenging material that Atoms For Peace is taking on. It's a breath of fresh air in a music world that can be all too boring and unpredictible - especially for established stars.

In the bare-bones club setting, with no elaborate light show and little buffer between them and their audience, Atoms For Peace are expressing themselves as the great musicians they are in a way that is as pure as it is intimate. 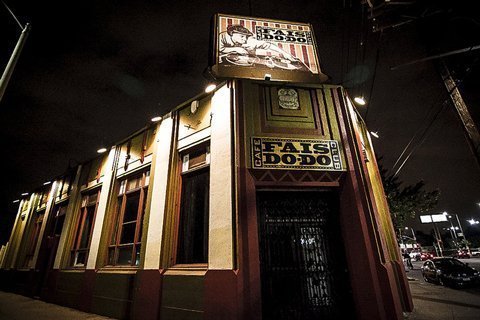