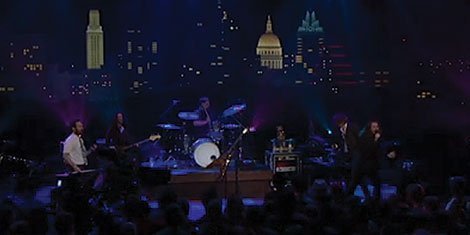 UPDATE: The full episode has been pulled from streaming, but check out exclusive video clips from the performance via the Austin City Limits website.

This past Saturday was a special episode of Austin City Limits TV featuring a split bill of Jim James (of My Morning Jacket) and The Black Angels, a local Austin Texas up-and-coming band.

The TV program featured just 4 songs by Jim James, which packed quite a punch. The full concert had actually been streamed live on the internet, but they edit things down for the show. Things start off funky and super high energy with "State of the Art (A.E.I.O.U.)" which has James shuffling around the stage singing as his band grooves behind him, and he also takes a crushing guitar solo at the end. As the audience is applauding, the end of the song song blends nicely into "Know Til Now" which is an avant-garde laptop driven electronic jam.

Things get trancey and spacey at the end of "Know Til Now," developing into a jazz vamp over which Jim James plays a restrained sax solo that sounds like a keyboard sax synth. This is quickly followed by the crowd pleaser "A New Life" as the band quiets down to a whisper for the beginning of the song before exploding with a tribal drum beat fused with an old school 1950s rock and roll vibe. Before the finale to the song, the crowd goes wild knowing that they're about to get taken on a wild ride. This time, the keyboard sax synth sound is obviously coming from Daniel Joseph Dorff, which is somewhat confusing from the audience perspective but adds to the mystery of the music and what sounds are coming from where.

Jim James thanks the crowd before "Actress" which is another genre bending tune combining rock, electronic, pop, jazz, and funk with synth string parts offset against electric guitar and bass as James wails away on vocals. James' voice is spot on throughout the performance, and his band is on fire. There's a spontaneity during the performance and a sense of unpredictability, even though everyone on stage is super tight and locked in throughout.

One of my favorite parts of ACL TV is the backstage interviews with the artists, and this is one of the more philosophical outtakes I've seen on the program. Jim James is asked if he's a spiritual person and gives an interesting response about his place in the world and trying to be a peaceful and creative person.

The Black Angels follow suit with dark and heavy psychedelic rock and the song "Evil Things" that is in stark contrast to the relatively light, fun, and modern Jim James set. The Black Angels are a timeless rock band in the sense that their sound has permeated the hard rock scene since the '60s. Seemingly a fusion of Black Sabbath and Jefferson Airplane, The Black Angels have a spooky quality about their music that is fascinating and yet easily danceable. The 6 songs they play are captivating rockers that transport their audience into a different head space.

"Don't Play With Guns" has been probably the most played song off their latest album Indigo Meadow and also one of their most political given the recent mass shootings in this country and conversations around gun control. Even with an elaborate light show, this is a band that doesn't need gimmicks to get their point across. They have a retro sound, but they've also developed their own sound.

During the interview section for The Black Angels, Alexander Maas talks about the significance of psychedelic music as a spiritual journey. Christian Bland follows that, talking about how the band brings old sounds up to date and pushes them further with old instruments combined with new technology. Bland references a 13th Floor Elevators lyric: "Open up your mind and let everything come through" from the song "Roller Coaster" as an ethos for what the band does during their performances.

Perhaps the best part of this excellent ACL TV episode is during the credits when they show Jim James playing basketball.

For more information, check out the official ACL TV webpage. 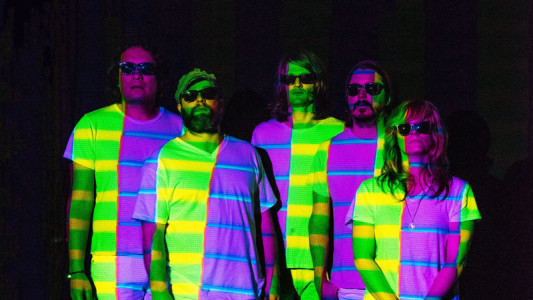 Jim James Sets 2019 Tour Dates: Ticket Presale Code & On-Sale Inf...
Tickets Jamband Psychedelic Rock Rock Singer-Songwriter Jim James My Morning Jacket
3
1550
Back to top
You must be logged in to upvote.
Registration and login will only work if you allow cookies. Please check your settings and try again.