Here's a new video from El-P and Killer Mike's Run The Jewels project. The song is "Banana Clipper," which features Mike's old friend Big Boi, and the video is aptly bananas.

Though Run The Jewels' self-titled album could function as a hilarious buddy comedy on its own, this video is a great visualization of the duo's comedic chemistry. In particular, Mike's line "Producer gave me a beat, said it's the beat of the year, I said El-P didn't do it, so get the fuck outta here" hits home harder when accompanied by footage of him gleefully nodding and pointing at El.

Keep scrolling to see some stills from the video and the song's lyrics, and head over to Run The Jewels' Zumic artist page for more info on the duo. 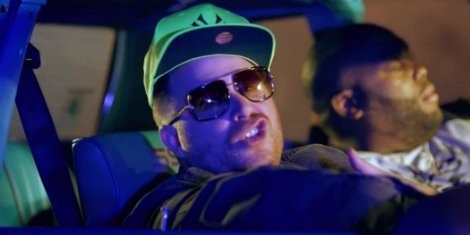 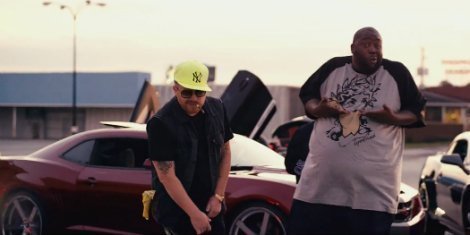 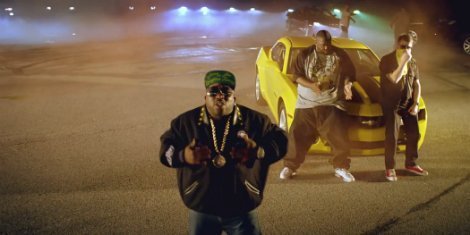 You wanna hang, bring your throat
I got stools and a rope
I'mma slang pope
Haranguing the land with a man's flow
A new edition to the art of the old code
That's fully retarded and put a part in your bold dome

Ay El
We the villains, we antagonist bad guys
Mercy me, merciless me putting pain in they sad eyes
It's time for Skywalker talk cause meet the true Darth Vader
I hit your mom in '03, but a G ain't ate her
So baby boy, you should tighten up and show some respect
Before I Melvin on you Jody, put my arm on your neck
Or worse yet be the reason your girl want a divorce
Be at your crib with your kids saying "fuck your fort
Lil' nigga!"

The style is
Radiation leak at Mile Island
Also known as Chernobyl talk
Listen for the sirens
For the green I'm a hoarder
You're the poor distorter
Sorta morbid sonnin' these fuckin' whoredome explorers
I'm bored
Enough of your bummy shit, it's numb to the core, sure
You suck a good dick for the fame
And couldn't resist getting played
I fuck like I'm headed to war
I'm really not playing no games
But tag me god damn it I'll kill the carrier mentions my name

Hey, I'm a soldier of fortune, a mercenary on beat
I'm merciless, I'll torture emcees, tie up both of they feet
If they refuse to run the jewels we beat the bottoms of feet
I'm talking grip pliers, guys, to the top of your teeth
Hey me and Jaime killed the competition, top of the heap
Is where we staying when they corpses resting under our feet
I sent they mom a little cash and a sympathy letter
Told her she raised a bunch a fuck boys
Next time do better
Bitch

We the old Atlanta, new Atlanta, future of the city
Daddy Fat Saxx don't give a damn cause can't nann new niggas get with me
Now it's true, niggas are simply simple minded simple Simons
Being dumbed down by the local radio stations by designing
But what I be rhyming, no payola is required
My bank account obese as fuck while yours sits on a diet
Nigga your lease is up, you're fired
Quiet, that's how the boss talk
Retain ownership on everything, every car bought
And paid for, no neighbors cause I'm sitting on acres
Went to Vegas, jumped the broom cause I wasn't trippin' on papers
Or no prenuptual agreement for mama
If we broke up and she took half I'd still be sitting on commas
Eight figures nigga

"Call Ticketron"
Run The Jewels (YouTube)
Music Hip Hop El-P Killer Mike Run The Jewels Atlanta, GA Manhattan, NY
2
1235
Back to top
You must be logged in to upvote.
Registration and login will only work if you allow cookies. Please check your settings and try again.