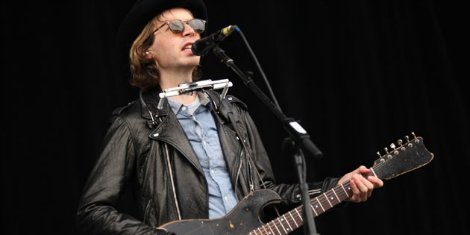 In an interview with Página/12, an Argentinian newspaper, Beck explained why he hasn't released a new album since 2008's Modern Guilt.

During the six year gap in album releases, Beck has remained busy taking several years to build a recording studio in his home and producing music for Charlotte Gainsbourg, Thurston Moore and Stephen Malkmus. Beck also stated this his hiatus was partially due to a spinal injury. He said, "It was a long, long recovery." Although he can't move the way he used to, he can "give a lot onstage."

Beck has also collaborated with Childish Gambino, Philip Glass, Jack White, The Lonely Island, and other artists in that time. In February he reimagined David Bowie's "Sound and Vision" with 160 musicians including a gospel choir. Beck released new material in the "almost-forgotten form" of sheet music via "Song Reader" in 2012. The book contains the sheet music for 20 songs that haven't been recorded.

His last attempt at releasing an album was unsuccessful, because he felt that the material "stopped ringing fresh." The good news is that Beck is expected to release a new album in February 2014 called Morning Phase. As for what it might sound like, Rolling Stone says it will be similar to Sea Change, as he is working with his longtime collaborator Smokey Hormel and the same musicians who were on the 2002 album.

The Página/12 article was translated into English by The Future Heart.