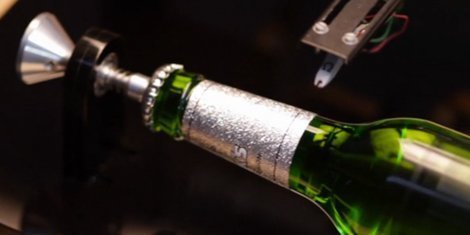 Thomas Edison created the phonograph in the 1870's; around the same time that Heinrich Beck created his first beer. In response to this information, or in an elaborate marketing ploy, Beck's Beer Company, in collaboration with Shine Limited, Gyro Constructivists and Arch Hill Recordings have created the first, to our knowledge, playable beer bottle, using the same technology as Edison's phonograph, as part of the Beck's Record Label project. In conjunction with the bottle, Shine Limited has created a video explaining the process of creating the bottle, and giving a little history behind it. Check it out.

The team at Gyro Constructivists essentially had to reinvent the original phonograph using modern technology and electronics. From printing the track to developing a device to play it, the company, quite literally, reinvented the wheel, albeit a much cooler wheel.

The first of it's kind, the bottle is not likely to be replicated by other companies, but is certainly something to marvel at. The company presented the design at the Semipermanent design conference in Auckland in May and received a standing ovation. Considering how long music and beer have gone together, we're a little surprised it took this long.

But what track was recorded on it, you ask. The track is called "Here She Comes," and it's by a New Zealand band called Ghost Wave. You can check out the track on the video about the modern Edison Bottle or on YouTube. The band is set to reveal their full length debut album Ages on June 29th with Arch Hill Recordings. If only we could get it in a six pack.