Columbus, Ohio's Van Dale list "doom punk from the moon" as their genre on their SoundCloud page. The artwork for their first album is (purposely?) pixellated as hell. Van Dale is certainly a band with a goofy sense of humor, but boy do they craft some catchy tunes.

"Bed Of Bricks (Isn't It)" mines the dynamic range that bands like Nirvana and The Pixies perfected, with delicate guitar picking giving way to a wall of noise, courtesy of seemingly maxed-out distortion pedals. What shines through all the shifts in volume and dissonance is the song's sterling melody, sung ever so sweetly throughout "Bed Of Bricks (Isn't It)."

Van Dale couldn't really be further from their self-ordained genre tag, with "punk" being the only part that somewhat applies to their actual sound. If we were given full tagging privileges by the band, we might choose "90s," "Lo-Fi," "Indie," and maybe even "Power Pop" to provide a more accurate idea of what to expect from Van Dale.

Other than the fact that two of its members come from the band Way Yes, relatively little is known about Van Dale. They self-released their album, and have no tour dates listed. We're hoping that this will change soon. For now, Van Dale's self-titled debut is available for stream and free download on their Bandcamp page. Get on that. 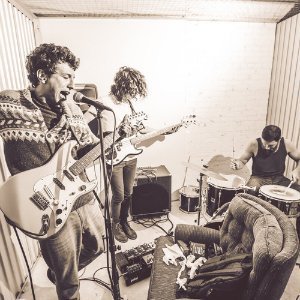