3-day event calls back to 1969 with music, talks, and special exhibits 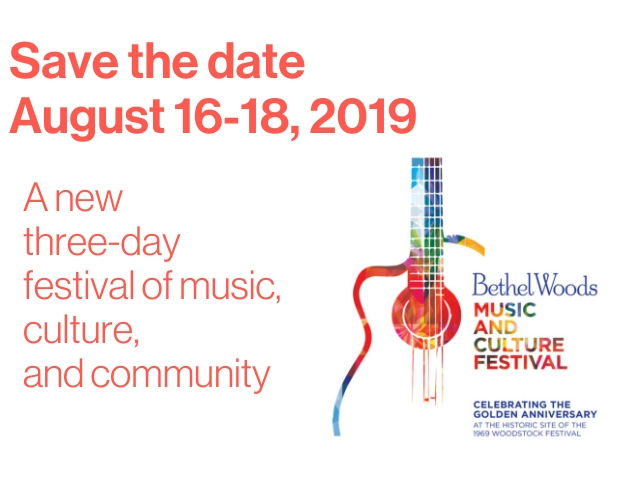 In 1969, the Woodstock music festival became a cultural phenomenon that defined a generation with "3 Days of Peace & Music" and legendary performances by the likes of Jimi Hendrix, Santana, Janis Joplin, Sly and the Family Stone, Joe Cocker, Joan Baez, The Band, and CSNY.

Approaching the 50th anniversary of the event, Bethel Woods Center for the Arts has announced three separate events in 2019 in collaboration with Live Nation Concerts.  Bethel Woods was the site of the '69 music festival, and opened as a permanent outdoor amphitheatre in 2006.  The museum opened in 2008, and has remained a year-round celebration of the original Woodstock music festival.

The "Bethel Woods Music and Culture Festival" will take place in Bethel, New York from August 16 to 18, 2019.  According to the Bethel Woods website, this will not be a typical music festival:

These three days of memorable experiences will include live performances from prominent and emerging artists spanning multiple genres and decades, and TED-style talks from leading futurists and retro-tech experts.  Festival goers will also be able to visit the Museum at Bethel Woods, which tells the story of the 1960s through immersive media, interactive engagements, and artifacts from the 1969 festival, as well as experience the special 2019 exhibit We Are Golden: Reflections on the 50th Anniversary of the Woodstock Festival and Aspirations for an Aquarian Future.

CEO Darlene Fedun shared a statement about the upcoming event:

Fifty years ago, people gathered peacefully on our site inspired to change the world through music.  As the stewards of this historic site, we remain committed to preserving this rich history and spirit, and to educating and inspiring new generations to contribute positively to the world through music, culture, and community.

Interestingly, this makes no mention of the Woodstock music festivals of the '90s.  The Woodstock festival brand was brought back as a major music event for the 25th anniversary in 1994, and the 30th anniversary in 1999.  While the '94 edition was a landmark success for the rock bands of the early '90s, the '99 edition turned into a nightmare with such extreme violence that police in riot gear had to break it up.  The festival has essentially disappeared for the past twenty years, and this approach is clearly trying to get back to the mission and values of the festival's 1960s creation.

Ringo Starr, Arlo Guthrie, and The Edgar Winter Band will perform on August 16.  Santana and The Doobie Brothers on August 17 while the lineup for August 18 has yet to be revealed.  For updates, subscribe through the Bethel Woods Center website.