Fans of Robin Thicke's hit single "Blurred Lines" can rejoice. For 30 seconds at a time, that is. The singer has released 30 second previews of each of his songs from the upcoming Blurred Lines, due out July 15th. You can check out the whole thing below.

Thicke has gained quite a bit of notoriety in recent months due to the video for "Blurred Lines." The uncensored version has been banned from YouTube and has taken some criticism for featuring nude models.

Thicke defended the video to GQ: "People say, 'Hey, do you think this is degrading to women?' I'm like, 'Of course it is. What a pleasure it is to degrade a woman. I've never gotten to do that before. I've always respected women'. So we just wanted to turn it over on its head and make people go, 'Women and their bodies are beautiful. Men are always gonna want to follow them around'."

Check it out above. 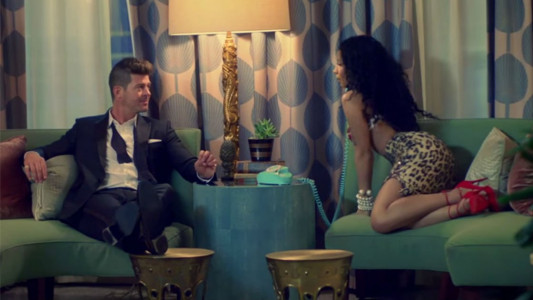