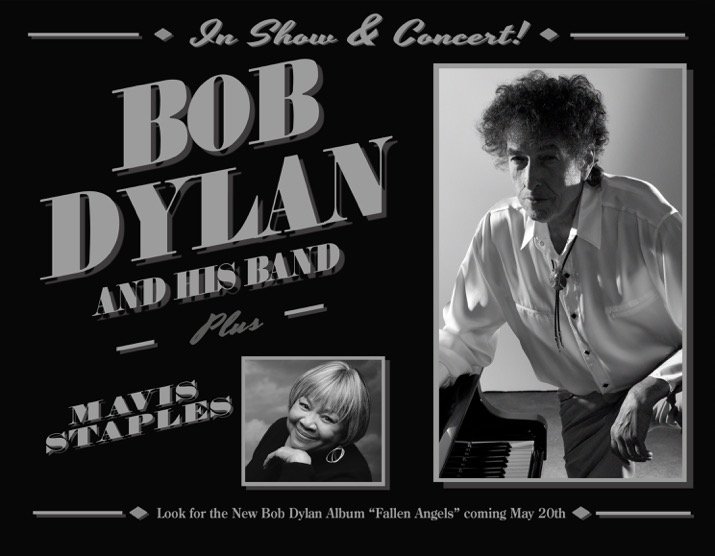 Rock troubadour Bob Dylan is showing no signs of slowing down in 2016. Earlier today, Dylan announced summer tour dates with Mavis Staples, and a new album called Fallen Angels — set to be released May 20, 2016.

Having a soul icon like Mavis Staples as the opening act is a great fit musically, and the two have a history together. In the early '60s, Dylan courted and even proposed marriage to the young Staples Singer before she married Spencer Leak in 1964. Mavis has covered several Dylan songs over the years, and appeared on Dylan's 2003 gospel album Gotta Serve Somebody.

The venues range from wineries and pavilions to the historic Forest Hills Stadium in Queens, where Dylan guested for a couple songs with Joan Baez in 1963 and played the first concert immediately following his controversial electric set at the 1965 Newport Folk Festival.

Dylan will begin his 2016 tour plans this April in Japan, playing 13 shows with his band. He will then return stateside for 27 shows with Mavis Staples. This will be Dylan's first North American tour since May 2015.

For every pair of concert tickets purchased (some exclusions apply), fans will receive a redemption code for a CD copy of the album, as well! There has been speculation about whether there will be a similar concept to Dylan's 2015 album of Frank Sinatra covers, Shadows in the Night, but nothing has been announced by the Dylan camp. Staples released her latest LP, Livin' On A High Note (Amazon, Spotify), on February 19, 2016.

When do Bob Dylan 2016 tour tickets go on sale and what is the presale code?

Tickets for the dates in Japan are now on sale to the public.

The Ticketfly promo code is TICKETFLY, the Live Nation pre-sale offer code is HITMAKER and the LN Mobile App password is COVERT. Pre-sale tickets for the North American dates go on sale as early as March 8 and as late as March 15 for American Express cardholders. You can try using promo code 8778770987, but you'll probably need an AmEx card to complete your purchase. Dylan's website has information about all pre-sales and dates.

Tickets go on sale to the general public beginning March 12 at 10AM. Every date can be different, so check the links below for more information.

For the latest music, news, and tour dates from Bob Dylan and Mavis Staples check out their Zumic Artist Pages.