Jimmy Fallon surprised everyone yesterday when he tweeted that Kanye West would appear on his show that very night to perform Yeezus cut "Bound 2." Charlie Wilson and some adorable kids showed up to provide guest vocals, and The Roots reprised their usual role of "best house band ever."

Kanye showed up wearing some sort of leather buttock cape (further revealing his recent affinity for leathery, skirt-like things) that the internet has thus far struggled to define. No, Huffington Post, those are not chaps. Fortunately, Kanye ultimately lost the night's fashion contest to Questlove, who rocked an amazing Bee Gees shirt. 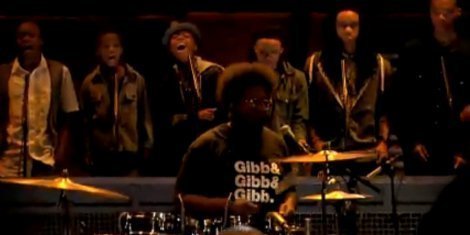 Watch the above video, and you will be treated to some of the most awkward scatting you will ever hear (courtesy of Mr. Wilson), as well as a thinly-veiled Ray J diss ("Brandy's little sister lame and he know it now"), a Jesus-on-the-cross pose, and the line "one good girl is worth a thousand chickens," all courtesy of Mr. West. 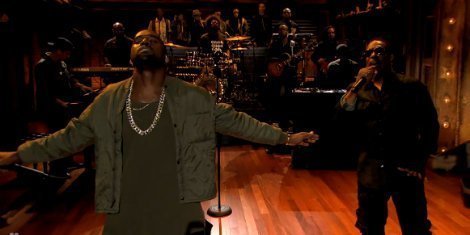