Check out the brand new Quasimoto music video for "Catchin' The Vibe":

Madlib continues to amaze and astound with his off-kilter alter ego, Quasimoto. This may be a little more like conventional vocal than your typical Quasimoto, but the video is completely off the wall. The turntable skills are completely on point, which is a refreshing old school hip-hop vibe. Also, some nice wordplay and name-checking.

We see our main character collecting garbage and then melting it down into vinyl records he's selling for $10 a piece. Now that's a hero we can believe in! Definitely catchin' the vibe from the song in the video, with dirty distorted sounds coming together to make something soulful and beautiful.

The Stones Throw website has a great backstory to why this was filmed in Finland and Romania instead of Los Angeles:

We set out to film the video for "Catchin' the Vibe" in Quasimoto's home town Lost Gates CA, but were denied filming permits. We were also denied permits for filming in Los Angeles County, possibly due to embarrassment caused in the wake of Quasimoto's official letter of recognition from the Los Angeles mayor and city council, who did not realize that Quasimoto was a semi-fictional cartoon character, weed-smoking promoter of chaos, obsessed with fat ass.

Our directors Tuomas Vauhkonen & Jeremias Nieminen instead chose to film primarily in Finland and Romania, using local actors. Madlib appears, under costume, in a cameo.

Published on Aug 6, 2013
from the album Yessir Whatever, produced by Madlib http://stonesthrow.com/quasimoto | http://itunes.com/quasimoto 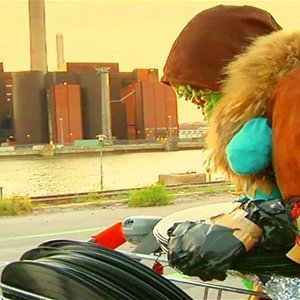