Rock supergroup The Divine Fits killed it with their 2012 debut album A Thing Called Divine Fits, which placed 23rd in Rolling Stone’s list of the 50 best albums of 2012 last year.

The foursome came back last week with two new songs, “Ain't That the Way,” and “Chained to Love,” which will be available as a double-A side single on July 23rd via Merge. Today we were treated to the lyric videos for the two new tracks.

The lyric video for “Chained to Love” makes the song feel different. Before, it felt like a song about being in a love so strong one could almost feel bound-up in it. The video keeps some of that emotion, but it feels a little off. There is a tension in this video that wasn't exactly there before. It's still about love, and chains, and the loving couples are happy and grow old together; but of all of the clips they could have used, this ’50s black and white one is an interesting choice by the Fits.

Check out the video above and tell us what you think. Then watch the lyric video for “Ain't That the Way,” which was also released today.

The Divine Fits are still on tour, but there are only a few dates left. Check them out below. 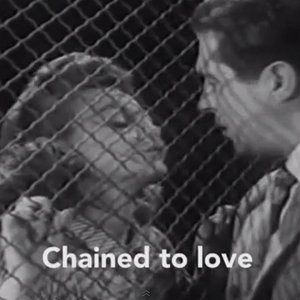