Following their performance on Saturday Night Live, Arcade Fire debuted a half-hour concert special on NBC. Directed by Roman Coppola and featuring a plethora of celebrity cameos, the band played three songs from their new record, interspersed with short sketches and awkward asides.

They kicked off the night with "Here Comes The Night Time," after booting Ben Stiller and Bono off the stage. Following a strange fake-promo featuring Aziz Ansari and Eric Wareheim, they broke into "We Exist" and finished up with "Normal Person," both also from the upcoming Reflektor. The performance was intense and gave us a fabulous preview of the new record, while the tongue-in-cheek sketches lent a surreal air to the special. Michael Cera, James Franco, Zach Galifianakis, and Bill Hader all stopped by, as well. It's definitely worth a watch, if only to see the fun and bizarre madness in the video.

There's also an Easter egg hidden in the special: A preview of a new song, this time playing at half speed during the fake horror movie trailer, from 14:14 - 14:50. Reddit user Kevindangerkiley sped it up, giving us a short sample of "Joan of Arc." Listen to the sample here. Pretty sneaky, guys.

Check out the video above and watch their performance on SNL--during which they debuted another new song--right here. Tou can pre-order Reflektor via Merge Records before its release on October 29th. 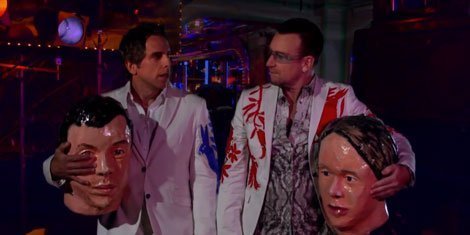