While visiting New York City last week for the CMJ festival, Austin-based band White Denim stopped into WNYC's studios to perform three tracks from their new album Corsicana Lemonade, which is now streaming on SoundCloud. Videos of the performances of "Corsicana Lemonade" (above) and "Come Back" (below) were posted on YouTube, and you can hear additional track "Pretty Green" in the audio stream posted further down the page, which also includes a short interview.

In the interview, host John Schaefer tries to parse out the meaning of the baffling phrase "Corsicana lemonade," which apparently refers to a small town in Texas who's only claim to fame is a railroad museum. They didn't give any clues as to where the lemonade part came from. Check out all three songs and the interview on the 20 minute-long radio show below. 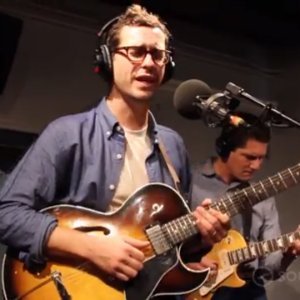