Polish composer, pianist, and instrument maker Slawomir Zubrzycki has recreated Leonardo Da Vinci's incredible "viola orgnanista," an instrument which dates back to 1470, but wasn't built in Da Vinci's lifetime. Now, more than 500 years later, you can watch a full performance on the instrument, whose diverse timbres can mimic an organ or an entire string section. 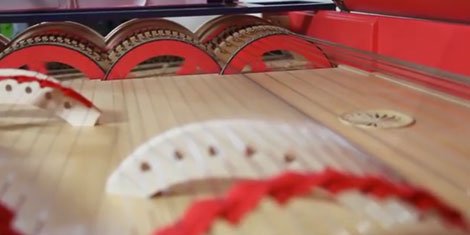 The viola organista is a visionary amalgam of musical technologies. While it looks like a much more ornate baby grand piano, there is a lot more at work. It combines the keyboard and strings of two of its contemporaries -- the harpsichord and the cello -- but adds the concept of a hurdy gurdy. A wheeled bow is what makes contact with the strings, generating an incredibly rich tone. The wheels are powered by a foot pedal which is reminiscent of the more modern player piano. As complex as it sounds, the basic premise is simple: Rather than strike or pluck the strings, the action of the keys lowers the strings onto the spinning bows, as though a violin bow being drawn across them.

Although a similar instrument was constructed in 1575, the viola organista never took off the way the piano did. The original designs languished for centuries until Slawomir Zubrzycki undertook this project. The video below details his construction process and the history behind the instrument. It's in Polish, but there are closed captions available.

It's remarkable to see the vision and mastery of Leonardo Da Vinci brought to life. Now, will someone please to get to work on his flying machines? 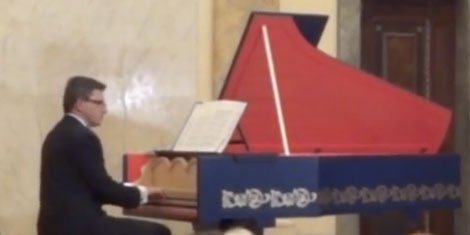