In support of their recent album Psychic, Brooklyn electronic duo Darkside have been performing individual tracks for outlets like BBC Radio 1 and Resident Advisor, but Boiler Room has now topped them all by releasing footage of an entire Darkside live set. Shot during sunset on a rooftop in Williamsburg, the performance is as picturesque as it is captivating.

Darkside members Nicolas Jaar and Dave Harrington blend Psychic tracks together in an effortless, hypnotic fashion, beginning their set with waves of ambience that slowly begin to take shape in the form of a song. One highly-rated YouTube comment even compares this intro to Pink Floyd's "Shine on You Crazy Diamond." Surprisingly, that's not the only classic rock element in this set, as the duo covers Black Sabbath's "Planet Caravan" around the 30:00 mark. It's chilling in the best way possible, and yet another sign that Darkside draws influence from a plethora of sources.

Stream Psychic here, and head over to Darkside's artist page to see tour dates and hear more of the band's music. 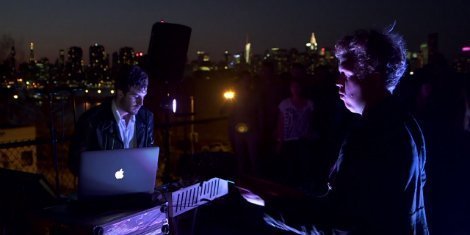