Dave Chappelle Talks About The Roots, Prince, & How He Knew Kanye West Would be a Star on The Tonight Show [YouTube Video]

In anticipation of his 9-show residency at Radio City Music Hall, Dave Chappelle dropped by The Tonight Show Starring Jimmy Fallon to chat about comedy and music.

"Dave Chappelle loves music could be a good Twitter handle," Fallon remarks as the two talk about the musical guests for Dave's upcoming shows. Among the confirmed guests are Busta Rhymes, The Roots, Janelle Monáe, Erykah Badu, and just announced, Nas.

They move on and Chappelle tells the story of the first time he met The Roots. The comedian was in a mall Portland, Maine, an hour after the band had been there, and a fan came up to ask for an autograph thinking he was "a lost Root." They later re-met at New York City's Electric Lady Studios, and the band became some of his first musical guests on Chappelle's Show.

Jimmy goes on to ask about Dave's feelings about being featured on the single art for Prince's "Breakfast Can Wait." Dave calls it "Prince judo," saying that the Purple One took something that was making fun of him, and turned it around.

Before they go, Chappelle recounts his first meeting of Kanye West, the day Jay Z's Black Album came out. He says everyone in the room knew Kanye would eventually become a legend while they were editing an episode and watching never-before-seen clips of Chappelle's Show. During the edit session, Kanye received a phone call which he punctuated by saying, "Because my life is dope, and I do dope shit."

Watch the full chat between Dave Chappelle and Jimmy Fallon above, and get tickets for Chappelle's Radio City shows at Ticketmaster. 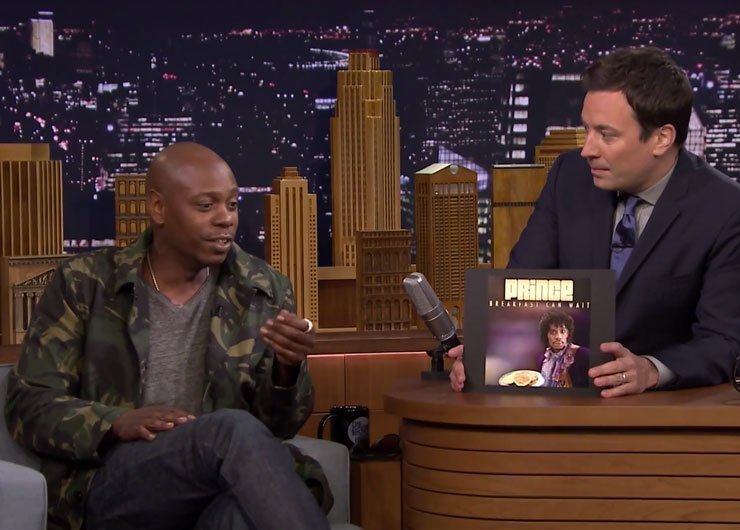