Dave Grohl sat down with Stephen Colbert to talk about his new movie, Sound City.

Grohl talked about heavy hitting musicians like Stevie Nicks, Neil Young, Rick Rubin, Rick Springfield, Barry White, Tom Petty, Carl Perkins, Rage Against The Machine, John Fogerty, Cheap Trick, and many more. Also some strange ones like Charles Manson and Evel Knievel. Also some good discussion of the Neve recording console. He calls it "The Cadillac of recording equipment"... with all due respect to Cadillac, I think audio pros / car aficionados might say the board is more like the Ferrari of recording equipment. This Neve Mixing Console is one of a small number of mixing consoles in the world that could be considered the absolute best in the world and still as good today as it was 40 years ago... but we'll cut Dave some slack!

How did you go from a guy who didn't make documentaries to making a documentary about this place where you recorded?
Grohl: Well... I look at it this way: I never took lessons to play the drums. I never took lessons to play the guitar. I just sort of figured it out. I think that if you're passionate about something and you're driven and you're focused, you can do anything you want to do in life.
Colbert: No one taught me how to yell at people.
Grohl: ...And you're really good at it! You're great.

Colbert: Did Evel Knievel jump this board over Barry White?
Grohl: Now that would be a movie!

Colbert: Does it have a story to tell?
Grohl: It's got a lot of stories to tell. The first thing we had to do when we got it was scrub all the cocaine and fried chicken out of it... and that was just Barry White!
Colbert: Ya know, that was a great album too... Cocaine and Fried Chicken. That was a legendary album.

They also talked about when Grohl recorded an actually legendary album, Nevermind, as drummer of Nirvana with Butch Vig as producer / engineer. 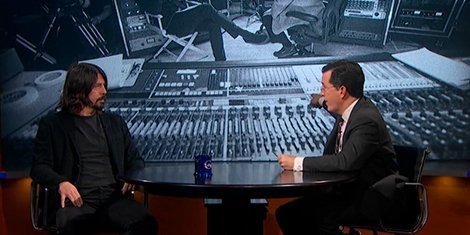