Dave Grohl on Reddit's "Ask Me Anything"

A few days ago, Dave Grohl participated in an "Ask Me Anything" (AMA) on Reddit for 45 minutes with a whole bunch of superfans and internet weirdos.

Here is the transcript, with only the good questions and Dave's answers:

CastawayOnTheMoon: What's your most simple pleasure in life?
Grohl: Being a father

ToastedAsparagus: Remember Thomas Jefferson High? The school that you attended and where you started the still continuing tradition of blasting music in the morning? Would you like to visit us? I will give you a tour and if you get lucky we'll take you out to 5 Guys.
Grohl: I would love to! There's a pic of me there.. anybody have it?
Britom: Oh my god is this it? 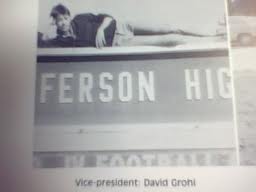 nosleeptilldeath: How was working with Jack Black and Kyle Gass? Will you be working on more Tenacious D records with them in the future?
Grohl: So hard to play the drums when you're laughing hysterically and tears are rolling down you cheeks. Maybe the hardest gig ever. And: YES

LibraryDrone: What was your experience like playing Satan in Pick of Destiny?
Grohl: It was easy. All I had to do was take of my Dave Grohl mask.

[deleted]: If you were president what are the first 3 things you'd do?
Grohl: 1. change the way people decide who is president. 2. resign.

emersonreed: What if one of your daughters came to you and said they want to do what you did and drop out of high school to join and tour in a band?
Grohl: Haha we'll cross that bridge when we come to it

Nigey_Nige: HOW DO YOU GET YOUR BEARD SO LUSCIOUS
Grohl: FISH OIL

fishinadish: What was it like to counter-protest the Westboro Baptist Church? You guys did a kickass job with your delivery. Why the fuck were they even protesting in the first place?
Grohl: Look. I'm going to hell anyway, might as well go out in style...

cluster_1: Do you remember Roll's Music in Falls Church? I think they're gone now, but I bought my first electric there and would constantly be there poking around as a kid. They'd always proudly brag that Nirvana's drummer used to shop there just a few years prior. Always wondered if it was true.
Grohl: It is true, but when i applied for a job there at 16, they turned me down..

joecarst: What would you normally be doing on a Friday night?
Grohl: Probably lying in bed with a laptop in front of me and a beer

fonzooo123: What's the most passionate crowd you've ever played for?
Grohl: Auckland, New Zealand. We triggered a seismic event with our show.

stubbs7:
1) Are there any plans for a follow up to Probot or Them Crooked Vultures?
2) If QoTSA are touring for their upcoming album, are you planning on touring with them?
3) Are there any artists you'd like to work with who you haven't had a chance to yet?
4) Can I hang out with you and Lemmy sometime?
Grohl:
1) No Probot plans yet, but never say never
2) Nope
3) Yes
4) Absolutely, see you at the Rainbow

Payne052: Thank you for taking the time to do this AMA Dave. Huge fan. What is more fun for you: playing guitar, drums, or singing?
Grohl: DRUMS

vickychapa: If you could eat one thing and only ONE thing, what would it be?
Grohl: Fried fucking chicken.

MexicanSeaf00d: What's the best advice to give to a 17 year old drummer?
Grohl: Listen to Back in Black

Oriolefan44: Hey Dave, I’m from Northern Virginia, and you’re my hero. You’ve had such a huge impact and been a role model to me and others, which got me wondering: Who was your hero? I know in My Hero you refer to the ordinary heroes out there, but was there any specific person, musical or not, who made you a significantly better man?
Grohl: i think my biggest musical hero growing up was probably Ian MacKaye he set a great example for all of us local musicians. still to this day i see him as the best example of a right-on musician.

Framedd: Dave I've been wondering this forever... What was with the square tattoo you used to have on your left arm???
Grohl: It was a homemade John Bonham three circles logo

MBrennan10: You're one of the most hilarious people I know. When will you host SNL / have your own comedy show / take over the word with your comedic wit?
I saw Foo Fighters perform in ATL Nov of 2011. Hands down the best concert I've ever been to. 3 hours of pure rock joy. I live in San Diego now; I hope to see you guys perform here in the future. Mad respect.
Grohl: Hosting SNL is the last item on my bucket list - so we'll see what happens

tiguebot: Dave, how unreal was it to jam with Paul the first time? I know if i could jam with you i would absolutely play the hardest i ever have. Thanks for the opportunity to ask my hero a question.
Grohl: The first time I jammed with Paul was at a stadium in Liverpool, I played Back in the USSR, Band on the Run, and I Saw Her Standing There and it was one of the greatest experiences of my life.

squigglepoo: Hey Dave, you are known as the nicest man in rock, but if you could pass that title onto anyone else, who would you choose? :)
Grohl: Fuck you.

WhoSaysRollicking: Can we expect to see more Dave Grohl films in the future?
Grohl: Maaaybe. It depends on wether I find something as inspiring as the story of Sound City

DrWangDan: What has been your best experience whilst making the movie?
Grohl: Getting accepted into the Sundance Film Festival. That was huge.

El_Draque: Hey Dave, do you think Seattle will have another chance at influencing American and world music like it did in the 90s?
Grohl: I hope so. It will never be the same, but we'll see...

Haystack-Charm: Hey Dave, I caught a screening of Sound City and loved it. Totally inspired me to get back into creating music. It's a dream of mine to record to tape but I just don't have the funds. What would you say about artists who record at home on their laptops due to funds?
Grohl: There's nothing wrong with digital recording - just make sure it sounds like YOU.

thumby_valentine: Hi Mr Grohl, I'm - like most others here - a huge fan! I have a few questions for you:
1) Now the Foos are on hiatus for a while, Sound City is out and ready to buy (which I plan to do soon) and QOTSA are working away, will there be room for, maybe, another Them Crooked Vultures outing? If not, then what can you tell us about the new Queens album?
2) What's your favourite album to chill/drink/work to?
3) After having a cameo role in The Muppets, how does it feel to be Animal's equal, given the pedigree of that character's origin?
Grohl:
1) I don't know Ask Al.
2) Paris Texas Soundtrack
3) Animal has no equal, I was merely an impostor

surchin4truth: What is one piece of advice you can give to people on their 20s trying to find a career that will support themselves without sacrificing their passions
Grohl: You will only be great at the things you love to do. Don't pursue a career in something you hate to do.

threedowg: Which one of your songs means the most to you and why?
Grohl: Probably "Walk" - which i wrote for my daughter as I was teaching her to walk.

ConundrumSteve: Hey Dave my question for you is, do you think "Grunge" will ever make a comeback? If so what are your thoughts on that?
Grohl: If you mean loud ass guitars, loud ass drums, and screaming ass vocals? That never went away ding dong.

dotslashmenu: Hi Dave, what was it like working with Killing Joke in 2003, and is Jaz Coleman really as crazy as people and the media make him out to be? BTW great drumming on the album.
Grohl: That was an incredible experience, they have always been one of my favorite bands of all time Jaz isn't crazy... he's just 1000 times smarter than anyone else.