David Bowie Threatened To Steal Arcade Fire's "Reflektor," Sang On It Instead 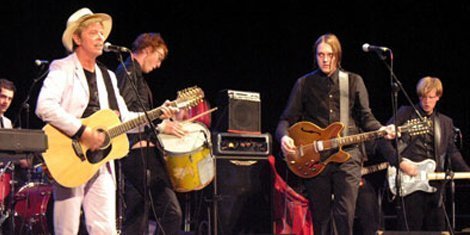 After months of speculation about Arcade Fire's highly anticipated fourth album, Reflektor, details about the Montreal band's work in the studio are beginning to surface. In an interview with NME, multi-instrumentalist Richard Reed Parry remarked that David Bowie threatened (jokingly) to steal the album's title track for himself if the band didn't finish it fast enough. Although Bowie didn't steal the song, he did end up singing on it.

The meeting between Arcade Fire and Bowie happened completely by chance. "He basically just came by the studio in New York while we were mixing, just to have a listen to the stuff we were doing," Parry explains. Bowie was very impressed with what he heard. Says Parry, "he offered to lend us his services because he really liked the song. In fact, he basically threatened us – he was like, 'If you don't hurry up and mix this song, I might just steal it from you!'" Parry and his bandmates, however, had a different idea: "we thought, well why don't we go one better, why don't you sing on our version? Thankfully he obliged, and we were really happy about that."

The results were stellar. Although Bowie's vocal cameo on the track is certainly exciting, Parry hints that the song represents just one aspect of a very diverse record. "It's pretty all over the map," he says. "We wanted to go to extremes. Sometimes it's like a bluesy bar band, and others it's more like a disco band in a weird old nightclub from a country nobody's ever heard of."

The album isn't set to drop until October 28th, but you can whet your now appetite by checking out the awesome music video for "Reflektor," which debuted earlier this month.

"Signs of Life" - Arcade Fire [YouTube Music Video]
Music Rock Arcade Fire Official Music Video
1
859
Back to top
You must be logged in to upvote things.
Registration and login will only work if you allow cookies. Please check your settings and try again.