UPDATED MAY 9, 2016: The festival has added a second weekend with the same performers.

Goldenvoice, founders of the Coachella music festival, recently announced their next megafest: Desert Trip. It is set take place October 7 to 9 and October 14 to 16, 2016 at the Empire Polo Club in Indio, California.

The lineup features some of the most popular and successful artists in music history: The Rolling Stones, Bob Dylan, The Beatles' Paul McCartney, Neil Young, Pink Floyd's Roger Waters, and The Who. Watch the announcement video above, courtesy of The Rolling Stones' YouTube.

Many are saying this is the biggest lineup in classic rock history, but there a couple examples of arguably bigger lineups. The Concert for Sandy Relief, a benefit show on 12/12/12 at Madison Square Garden in New York, NY featured four of these six bands (The Rolling Stones, Roger Waters, The Who, and Paul McCartney) as well as Bruce Springsteen, Eric Clapton, Bon Jovi, Michael Stipe, and Eddie Vedder. Also, Woodstock had had a fantastic lineup in August of 1969. Having said that, these three days in October of 2016 should be something truly special.

Paul Tollett, CEO of Goldenvoice, spoke with Rollingstone about how he made this dream lineup a reality:

The theme was rock & roll bands that have been playing consistently since the early days... If I'd made a financial offer first, I would have been rejected... asked what I was working on. I said, 'I'm working on one of the greatest shows of all time. I don't know what that means, but I'll come back to you.'

No supporting acts have been announced at this time, and Consequence Of Sound reports that, "According to a representative for the festival, only these six music acts will be playing the festival. No further additions are coming." One of the nice things about only two bands per day is that each one will get time to stretch out and play a full concert instead of a typically shortened festival set. There will also be some interesting opportunities for once-in-a-lifetime guest collaborations on stage.

WHEN DO DESERT TRIP 2016 TICKETS GO ON SALE AND WHAT IS THE PRESALE CODE?

Tickets go on sale through the Desert Trip official website on Monday, May 9, 2016 at 10 AM PT.

No presale codes or passwords have been announced, and we don't expect any to be. Check back, as we'll update this page if/when we get more information. We recommend following each of the artists on social media, as well as signing up for the Desert Trip mailing list for the latest.

If you're looking to buy tickets, you might want to do your homework in preparation of the on-sale. Here's a rundown of the different options that will be available:

Golden Voice has a PDF which lists all the ticket options with total price including fees. There are various other packages, including fine dining, transportation, and lodging. The festival website also has a venue layout, so you can see where each section is in relation to the stage.

Keep in mind, details are subject to change. Click the links above for the show you're interested in. 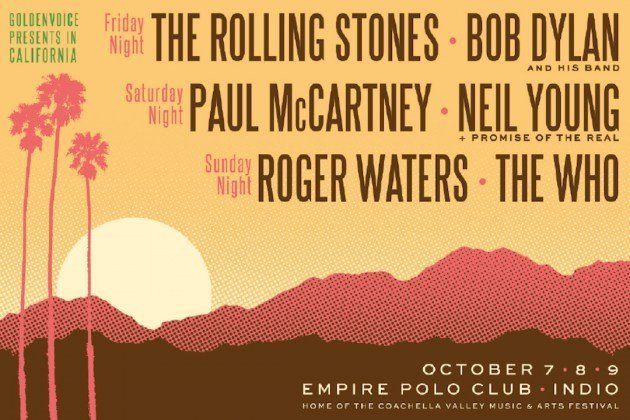