Green Day's major label debut was Dookie, and what a debut it was. The album continued the pop punk sound of Green Day's previous two records, but also demonstrated their clear growth as musicians. They strayed away from love themes, instead choosing topics related to boredom and growing up. It was an album that defined a generation, and to this day it remains beloved among fans and casual listeners alike. In addition to singles such as "Longview," "Basket Case," and "When I Come Around," Dookie contained a host of other gems like "Having A Blast" and album closer "F.O.D."

Dookie almost instantly launched Green Day to fame: The punk trio won the 1995 Grammy award for Best Alternative Music Album and were paraded as Rolling Stone's Best New Band in 1994. Dookie remains Green Day's highest selling album, with 16 million copies sold worldwide, and it is frequently listed as one of the best albums ever released, exemplified by its ranking at 193 in Rolling Stone's list of 500 Best Albums of All Time. Green Day are credited with leading the pop punk movement that epitomized the mid 1990s, mainly due to the overwhelming success of Dookie. 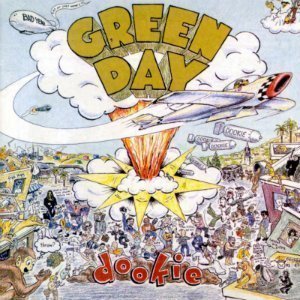 You can buy Dookie on iTunes.

"Troubled Times" - Green Day [YouTube Lyric Video]
Music Pop Punk Pop Rock Green Day Berkeley, CA Lyrics Video
1
840
Back to top
You must be logged in to upvote things.
Registration and login will only work if you allow cookies. Please check your settings and try again.