Last Friday, Beyoncé set the internet on fire by releasing a 14 song, 17 video self-titled "visual album" on iTunes with no advance notice or promotion. Today, she's unveiled the official music video for "Drunk In Love" on YouTube featuring her husband, rapper, and music industry mogul Jay Z. Watch above.

Shot entirely on the beach at night in black-and-white, Beyoncé sings about being "Drunk in Love" which is a play on her 2003 hit "Crazy in Love" that also featured Jay Z. At over 6 minutes, it's pretty long for a pop song / video. The instrumentation goes from classic pop to an electronic trap feel, with Beyoncé going back and forth between singing R&B and rapping. During Jay-Z's verse, Beyoncé shows a range of emotion and looks pretty angry when he gets into some graphic sexual storytelling. It's hard to know entirely what to make of the trophy at the beginning of the video, but the obvious connection is that she sees herself as the trophy wife as she's currently on the Mrs. Carter World Tour.

Amazing how 10 years have passed. The two pop stars were married in 2008 and had a child earlier this year. They continue to put out high quality music in interesting ways. This video is one of the 17 videos that make up the album, which is currently available on iTunes exclusively as a package deal. Individual songs will begin to be sold on December 20th and a CD / DVD is expected to be released soon. 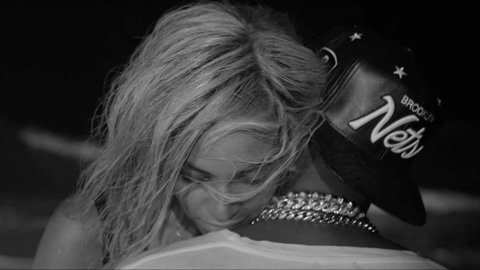