Ed Sheeran is one of music's hottest artists at the moment. With his upcoming album due June 23rd, the ginger-haired pop singer has been very busy lately promoting his new music, but he did make time for an interview with Nardwuar. You can watch the full interview above via YouTube.

Sheeran tells the quirky YouTube host how he has met Queen Elizabeth and how his mother has been partying with Kylie Minogue. Nardwuar inquires as to whether or not Ed is homesick and then bestows him with a gift "to remind him of home," a vintage 1960s Pink Floyd poster from their concert at Queen Elizabeth Hall.

Ed Sheeran then talks about his collaboration with Nick Mason and Pink Floyd stating, "Nick Mason is one of the nicest people I've met, just really genuine and the stories he has about Jimi Hendrix and Floyd and just all this amazing stuff..Yeah, he's got some good stories."

Nardwuar continues the interview in his typical comedic manner asking Sheeran if he knows what a microphone smells like. Sheeran humors him and tells of how his tech manager once wiped his microphone down with alcohol wipes causing him "to get drunk on stage."

The humorous story leads into Nardwuar's second gift for the singer, Big Pun's Capitol Punishment album. Sheeran explains his appreciation for the rapper claiming, "he's one of the most talented lyricists out there." Several more gifts are given to the star including a Gang Starr album and a No I.D. album. Ed takes the opportunity to discuss how No I.D. produced the track "Kiss Me" from his last album.

Ed Sheeran also takes a moment to discuss his family life and tells of his mother's jewelry business and how Kate Middleton is a customer. Nardwuar jokes about how the star is "surrounded by royalty," mentioning his friendship with Phillip Butah, an artist who had not only painted portraits of Prince Charles, but also designed the cover art for Sheeran's album, +. Sheeran follows up saying, "The next thing I'll be married to Pippa or something..."

Nardwuar's last gift for the singer is a small figurine of Biggie. The two discuss Ed Sheeran's appreciation for Biggie's lyrics and Sheeran jokingly quotes a few verses of a popular Biggie song. Sheeran is grateful for the unique gift and says, "This is going to be my little mascot now."

Ed Sheeran will be on tour soon and his tour dates can be found here. You can also listen to his latest single, "Sing," here on zumic.

For the latest information on Ed Sheeran be sure to check out his Zumic artist page. 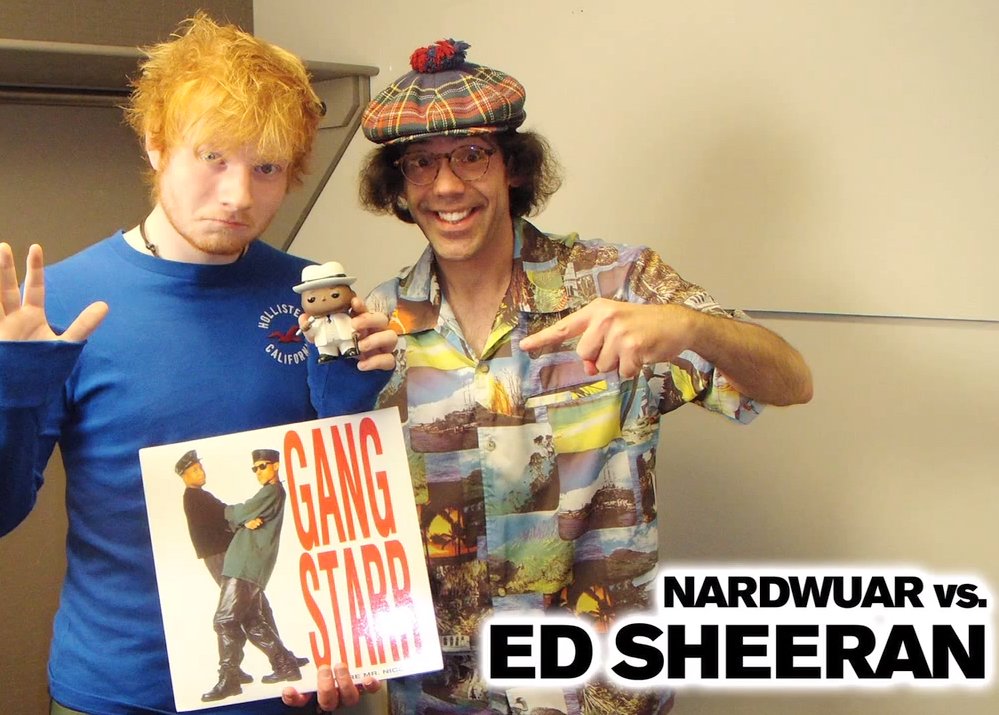 "BLOW"
Ed Sheeran (YouTube)
Music Rock Bruno Mars Chris Stapleton Ed Sheeran Official Music Video
3
1190
Back to top
You must be logged in to upvote things.
Registration and login will only work if you allow cookies. Please check your settings and try again.