UPDATE: The video has been pulled due to a copyright claim. The picture of Trent Reznor on a unicorn remains: 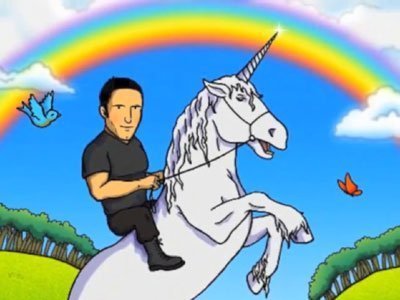 Yesterday, Nine Inch Nails released the official audio for "Everything," a track from the upcoming Hesitation Marks. It's NIN's first attempt at upbeat, and it appears that the major key and uplifting lyrics didn't quite land with some fans.

Although Hesitation Marks is named after superficial wounds associated with suicide attempts, Trent Reznor's typical darkness seems to have been replaced by puppies and rainbows. So, to accompany "Everything," one fan made a compilation of puppies and rainbows, which should probably be the official video. Check it out above.

Oh, and just in case you need to wash that sweetness out of your mouth, here's the official video for NIN's "Came Back Haunted," directed by David Lynch. It's better.

"Outside"
Trent Reznor (YouTube)
Music Ambient Electronic Atticus Ross Trent Reznor Audio Single
2
1018
Back to top
You must be logged in to upvote.
Registration and login will only work if you allow cookies. Please check your settings and try again.