Say Lou Lou are twin sisters who grew up splitting their time between Sweden and Australia and make dreamy, ethereal pop that's almost as beautiful as they are. The latest offering from the duo is a lush cover of Tame Impala's "Feels Like We Only Go Backwards."

On their SoundCloud, Say Lou Lou give fellow Aussies Tame Impala props for reminding them of music they listened to while growing up, and also detail their love for the song's original version:

"Feels Like We Only Go Backwards" is really enthralling, it's like there are several different worlds inside one song. How it feels like a simple rock song (with almost pop melodies) but with a field of colour bursts of warm layered instrumentation that re-invents itself throughout the whole song... but it wasn't until we started making our own version that we discovered how beautiful the lyrics are - another world in itself - so we decided to strip the groove back and take it into another place.

Hear more of Say Lou Lou's music on their SoundCloud page, and check out the wonderfully psychedelic video for the original Tame Impala track on YouTube. 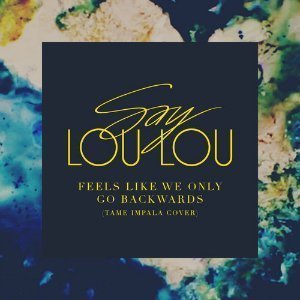