Celebrating 25 years on the road 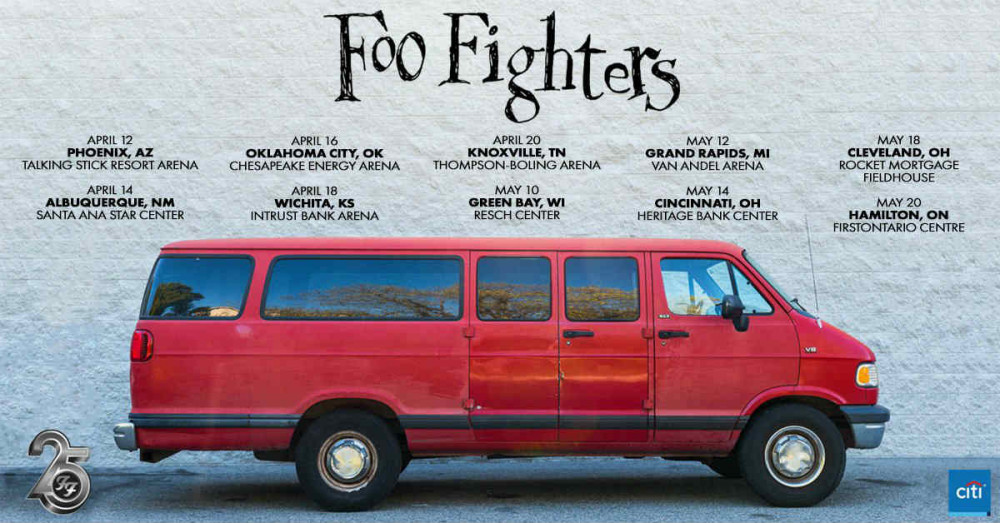 Foo Fighters have added 2020 tour dates to their schedule, celebrating 25 years as a band.

After Foo Fighters' self-titled debut album was released on July 4, 1995, it became an instant hit with classic songs like "This Is A Call" and "Big Me" plus Nirvana-esque hard rockers like "I'll Stick Around" and "Alone + Easy Target." It's worth mentioning that Grohl recorded the first album mostly by himself, recruiting guitarist Pat Smear and bassist Nate Mendel to perform live. The other current members — Taylor Hawkins, Chris Shiflett, and Rami Jaffee — joined in later years.

For the silver anniversary, the Foo Fighters will return to many of the cities on the band's first tour, which was in the opening slot for Mike Watt. Making the shows extra special, the group's stage setup will be "in the round" at venues across North America from April through May. Their 2020 itinerary already includes festival appearances and a short run through Europe in June.

When do Foo Fighters 2020 tour tickets go on sale and what is the presale code?

The fan club presale password is BIGRED. Citi cardmembers can use the passcode 412800, but you will need a Citi card to complete your purchase. The Live Nation password is SOLO and the LN Mobile App code is COVERT. Click through the individual concert links for more information about the show you're interested in.

We recommend following Foo Fighters on social media and signing up for the band's free newsletter, in addition to checking your local venue’'s social media and email subscription service, to get the most up-to-date information.

For more, check out the Foo Fighters' Zumic artist page.

"Play"
Dave Grohl (YouTube)
Music Instrumental Rock Dave Grohl Foo Fighters Live Performance (Video)
2
821
Back to top
You must be logged in to upvote things.
Registration and login will only work if you allow cookies. Please check your settings and try again.