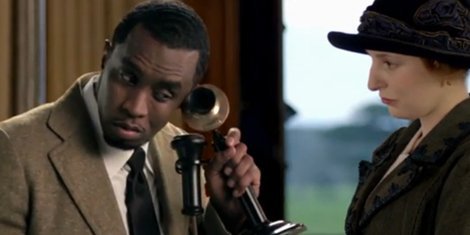 Last week, hip-hop mogul Diddy was positively giddy with excitement over his latest foray into acting. He tweeted:

MY BIG NEWS: So happy to announce that Im a series regular on DOWNTON ABBEY-my favorite show+i'll be debuting a sneak peek tonight 12am PST!

Though this was immediately said to be untrue by Masterpiece, Diddy continued to tweet his excitement and told people to be ready for his first upcoming episode. People's reactions were mixed, though it would seem most of the negative reactions were from fans of the show. But it turns out that they had nothing to worry about, as Diddy's place in Downton Abbey (or as he calls it, as most Americans did at first, Downtown Abbey) was just a joke for Funny or Die.

Diddy joins the cast as Lord Wolcott, the new owner of Downton Abbey, and proceeds to shake things up at the previously stuffy British estate. Watch the video to see if he is an improvement to the show, or if he seems a bit out of place there.