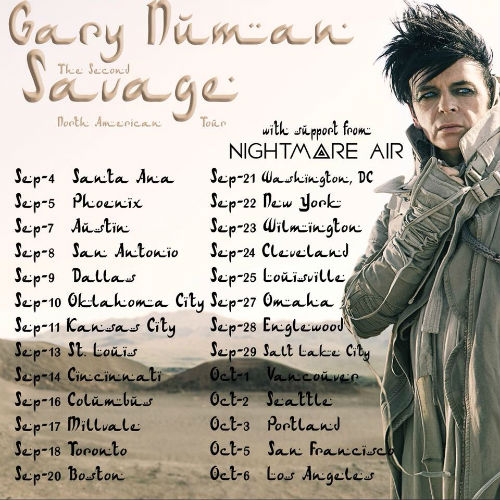 Electronic music pioneer Gary Numan has announced 2018 tour dates for North America, which is in connection with his 2017 album Savage (Songs from a Broken World).

The new shows are scheduled to begin on September 4 in California and extend into early October. The opening act for all the shows will be the band Nightmare Air.

When do Gary Numan 2018 tickets go on sale and what is the presale code?

Presales for Live Nation, LN Mobile App, and local venues / radio will begin on April 25. Keep in mind, each date is different and details are subject to change. Click through the individual concert links for more information about the show you're interested in.

The Live Nation presale offer code is DANCE and the LN Mobile App code is COVERT.

We recommend following Gary Numan on his social media accounts, in addition to checking your local venue's email newsletter and social media, to get the most up-to-date information.

Pick up Savage (Songs from a Broken World) on Amazon.