"Get It" - Run The Jewels [Official Music Video]

Get It from Run The Jewels on Myspace.

Run The Jewels is a hip-hop collaboration between Killer Mike and El-P and they've just come out with an official music video for "Get It," the first track off their eponymous EP, Run The Jewels. In contrast to the aggressive and verbose lyrical delivery that both artists are known for, the video is somewhat lighthearted and sociable. It features live footage and photos from their most recent summer tour with Despot and Kool A.D. (former member of Das Racist) and some amusing off-stage shenanigans. For just two guys in a video that runs for three minutes and fourteen seconds, there sure are a lot of flat-brimmed MLB hats and shiny gold chains; some might even say too many. I say, not enough.

You can download the entire album for free via Fool's Gold Records if you liked what you just heard or if you'd like to check out the tour schedule. 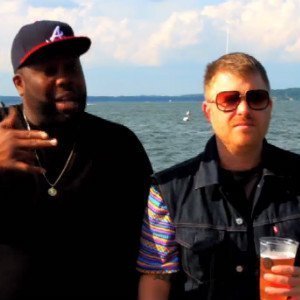 Lorde Unveils 2018 Tour Dates for North America: Ticket Presale C...
Tickets Pop Lorde Mitski Run The Jewels Tove Styrke
2
1355
Back to top
You must be logged in to upvote things.
Registration and login will only work if you allow cookies. Please check your settings and try again.