Soul sensation Sharon Jones is back after beating the bile duct cancer she was diagnosed with last year. Originally scheduled for release last August, Give the People What They Want is now available to stream courtesy of Spotify a little over a week before it hits the shelves on January 14th.

Jones' sixth album -- which again features the ever-stellar Dap-Kings as her backing band -- Give the People What They Want is a sunny collection of retro style music. Over the last decade, Jones and the Dap-Kings have been masters of bringing R&B back to the glory days of the Motown and Stax record labels, and they show no signs of letting up with this one.

Arrangements are tight all around, a fantastic crew of back up singers bolster nearly every track, and Jones sings with more grace than ever, mostly forsaking her characteristically powerful vocals in favor of a softer, sweeter delivery. Songs like "We Get Along" and "Slow Down Love" could be filed next to romantic soul classics such as Bill Withers' "Lovely Day" and The Emotions' "So I Can Love You," and prove that at 57, Jones is still a master of seduction. But at the drop of the hat, Jones can revert to her old foot-stomping and wild-eyed ways. If the exclamation mark in its title isn't a dead give away, opener "Retreat!" rocks and rollicks relentlessly, and finds Jones kicking out a former lover. This is a lady whose bad side you do not want to awaken.

You can preorder Give the People What They Want from Daptone Records. For more Sharon Jones, check out the animated videos for "Retreat!" and "Ain't No Chimneys in the Projects," her recently-released Christmas song. You can discover even more music, news and tour dates by visiting Sharon Jones & the Dap-Kings' Zumic Artist Page.

Give the People What They Want tracklist: 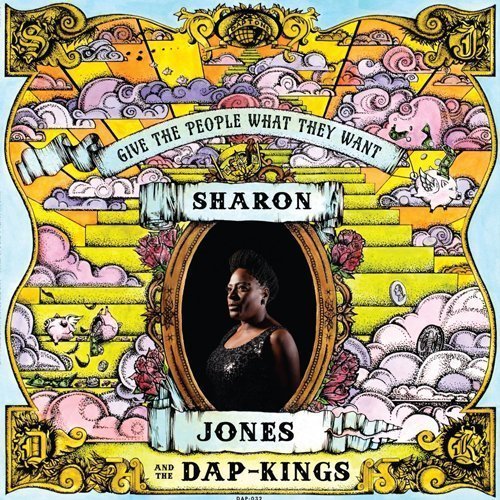