It's not new news that Lil Wayne served time in jail and what's more, served it at Riker's Island. What is news is the depth to his message and creativity exposed in "God Bless Amerika". Clear from cleverly wrought lyrics, Lil Wayne the artist can see through open, honest eyes what happens in his America:

My country, 'tis of thee, sweet land of kill em all and let em die, God bless America, this ol' godless America.
...
The stars on the flag are never shinin.
...
Military Minded.
I used to say fuck the police, now I say fuck jail.

As far as the general criticism of the American poli-judicial system within the video, Lil Wayne explains in a statement to Billboard: "I was fortunate from my God given talents to escape the hood and see the other beautiful places this country has to offer, but most people who are born in that environment don't get that chance. That's their view of their America. That was Dwayne M Carter from Hollygrove New Orleans view of America. That's who I'm speaking for in this song." 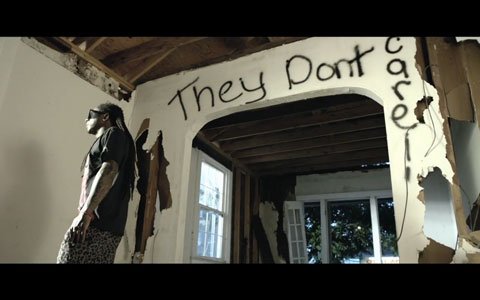