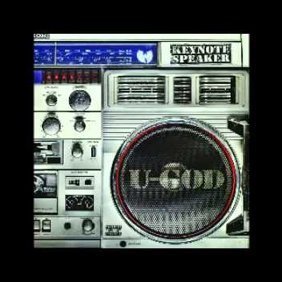 Wu-Tang member U-God released a new song "Golden Arms" today in anticipation of his new LP Keynote Speaker. In the new self-titled track, his alias is Golden Arms, the Staten Island rapper reflects on his childhood, living in the hood, moving on to rapping and "holding down the fort."

U-God brings Wu-Tang Clan brothers Ghostface Killah and Raekwon to collaborate on "Golden Arms." The result is a classic-sounding Wu-Tang track that reminds us why Wu-Tang is so damn good. Not that we needed reminding.

Producers Jay Serbe and Jose Reynoso Jr., a frequent sound engineer for Wu, keep the track sounding modern, giving U-God a sci-fi like, synthy beat to rap over. The result is worth a listen.

Keynote Speaker will be available on July 23rd and features artists like Method Man, Inspectah Deck, GZA, Kool Keith, Styles P and Elzhi. In the meantime take a listen to "Golden Arms" above.