Following videos for "Demons" and "Sea Of Love," the National have just released another single from their recent album, Trouble Will Find Me. "Graceless" is their latest release, and its video captures grown men enjoying some rediscovered youth. The National are all clad in full suits, but that doesn't stop them from having a good time: They dive into a pool, drink beer, slip 'n slide down a hill, and wander through a forest before jumping around an inflated castle. The video is all in black and white, yet it shows a sense of childlike and carefree fun.

Filming wasn't all fun and games though: Earlier this month the band told Rolling Stone about the pain they suffered in order to create the clip. Frontman Matt Berninger revealed that the video "involved a great deal of binge drinking beer. We shot it at my mom and dad’s house in Cincinnati and kind of destroyed the place and ourselves along the way." Bassist Scott Devendorf added "I gave myself a minor concussion, head injury on the slip and slide." Berninger continued:

I had a serious face injury, Bryce [Dessner] had a back injury [from] riding a bike into a swimming pool and my face hit the water hard all three times. I had glasses on, I had bruises around my eyes where the glasses hit. It was the most brutal video we’ve ever done. It was really fun, but it cost us. No one died, though.

"Graceless" was sent to radio yesterday, and is available on the band's new album, Trouble Will Find Me. You can buy the record on iTunes now. You can also catch the band on tour between September and November - find dates and tickets on their official site. 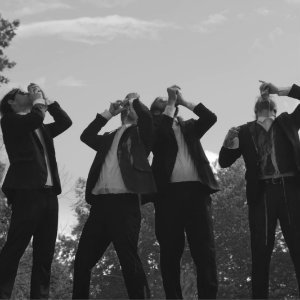 "Big Red Machine"
Big Red Machine (Spotify)
Music Indie Pop Big Red Machine Justin Vernon The National
2
988
Back to top
You must be logged in to upvote things.
Registration and login will only work if you allow cookies. Please check your settings and try again.