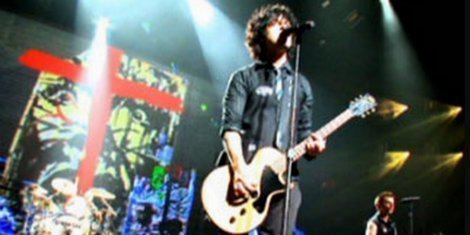 Green Day has been cleared in a lawsuit over the use of artwork during their 2009 21st Century Breakdown tour. An L.A. artist filed a lawsuit against the punk rockers for using his copyrighted artwork as part of a tour backdrop video, but the court has ruled in Green Day's favor.

Artist Dereck Seltzer created the "Scream Icon" image back in 2003. He then put the black and white image on posters and stickers, and displayed them in public places around Los Angeles.

In 2009, Green Day was preparing to tour in support of their 8th studio album, 21st Century Breakdown. They hired photographer Richard Staub to make video backdrops for their summer and fall tours, and Staub was inspired by a torn and dirty "Scream Icon" poster that was on a brick wall on Sunset Boulevard. Staub altered the color and contrast, added a brick background, and put a red cross over the image, creating a piece to be used during Green Day's song "East Jesus Nowhere."

Here is a side-by-side comparison of Green Day's use (left) and Seltzer's original "Scream Icon" image: 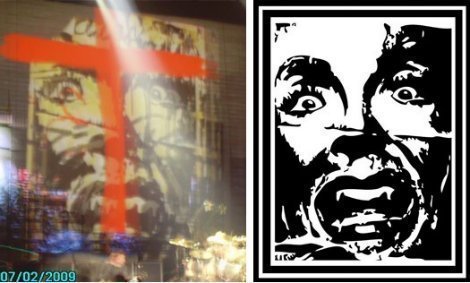 Seltzer complained about the use of his image, and when offered concert tickets in a settlement, he decided to sue Green Day, Warner Bros. Records, and related parties for misappropriating his copyrighted work. In summer 2011, Seltzer's lawsuit was dismissed. The Los Angeles federal district judge found Green Day's use to be fair and transformative.

On Wednesday, August 7th, Seltzer's lawsuit against Green Day was again denied. The 9th U.S. Circuit Court of Appeals in California upheld their original decision in this "close and difficult" case, stating that Green Day's use of the "Scream Icon" was "transformative and not overly commercial."

With the spray-painted cross, in the context of a song about the hypocrisy of religion, surrounded by religious iconography, [the] video backdrop using Scream Icon conveys new information, new aesthetics, new insights and understandings that are plainly distinct from those of the original piece.

Additionally, Seltzer testified that Green Day's use of his art had no effect on the value of his work, and the fact that Green Day did not use the image in any merchandise or promotional materials also helped the band's odds.

Although Green Day won the case, they still must pay the $201,000 in attorney's fees, as Seltzer's case was not unreasonable.

"Troubled Times" - Green Day [YouTube Lyric Video]
Music Pop Punk Pop Rock Green Day Berkeley, CA Lyrics Video
1
875
Back to top
You must be logged in to upvote things.
Registration and login will only work if you allow cookies. Please check your settings and try again.