On October 24th, Lady Gaga premiered her new album ARTPOP at club Berghain in Berlin, Germany and broadcast live by ampya.com. As part of the night's festivities, Mother Monster played a solo version of the song "Gypsy" on piano as she sang her heart out which you can currently watch on YouTube.

Always one to dress provacatively, Lady Gaga is wearing a moustache on her face and sheer lingerie on her body. She also sings from the point of view of a man at one point, saying "I'm a man without a home," underscoring her motif of explored gender and sexual identity.

ARTPOP is due for official release on November 6, 2013. You can pre-order it on iTunes and Amazon. 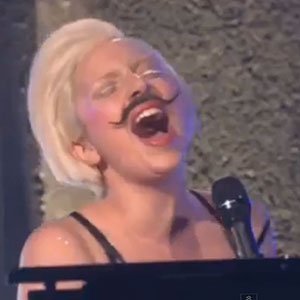 Lady Gaga Extends 2019-2020 Las Vegas Residency Dates and Details...
Tickets Dance-Pop Jazz Pop Lady Gaga
3
6643
Back to top
You must be logged in to upvote things.
Registration and login will only work if you allow cookies. Please check your settings and try again.