Pharrell has long been one of the top music producers in the world. Now he's making history as a music video producer with his 24 hour video for "Happy" which can be seen at 24hoursofhappy.com. For your convenience, you can watch this 4 hour segment of the full video on the iamOther YouTube Channel:

The beauty of the website is that it's a never ending loop, but the user can control the time of day. This comes the same week as the interactive video for Bob Dylan's "Like A Rolling Stone" that also featured lots of video interpretations of the same song and must have been a huge undertaking for the production team to create that much footage. The song might get a little tired after a few times hearing it, but the concept is so fantastic that we'll give Pharrell a pass on that.

It appears the video was shot in Los Angeles, and the list of cameos seems to indicate that would be right. If you're so inclined, watch the whole thing to catch appearances by Odd Future, Magic Johnson, Jamie Foxx, Steve Carrell, Leah LaBelle, and others. "Happy" is a really cool upbeat song, but it gets a little tired hearing it over and over. At 4 minutes long, that means it actually gets played around 360 times in the full 24 hour video. That's a lot.

We also recommend checking out Pharrell's live performances of "Happy" on The Queen Latifah Show. 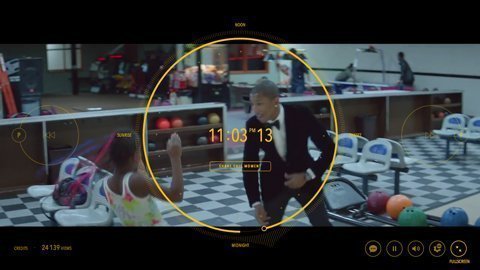 "Supplies"
Justin Timberlake (YouTube)
Music Pop Justin Timberlake Pharrell Neptunes
2
1527
Back to top
You must be logged in to upvote.
Registration and login will only work if you allow cookies. Please check your settings and try again.