Joey Bada$$ has just released a video for the track "Hilary Swank," which was featured on his Summer Knights mixtape from earlier this year.

In an interview with Peter Rosenberg last week, Bada$$ said he was trying to distance himself from his reputation as a '90s hip-hop revivalist, but the "Hilary Swank" video does little to back up his words.

The clip features grainy distortion the likes of which you haven't seen since you tried to record Beavis & Butt-head for the umpteenth time onto a well-worn VHS tape. It's a cool effect, but not one that makes Bada$$ seem any more modern. Musically, "Hilary Swank" is a laid-back track that (not so surprisingly) also echoes hip-hop's Golden Era, though Bada$$' stunning, internal rhyming scheme provides at least some link to the present.

Despite his own misgivings about his '90s-indebted sound, it's clear that Bada$$ is one of the most promising young rappers around right now, regardless of what era people claim he's imitating. 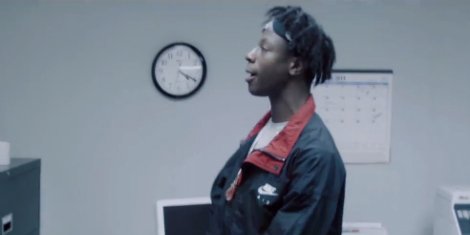