Pusha T is the professor for the street scholars in his new video "Hold On." The track about the drug peddling lifestyle is featured on his latest album, My Name Is My Name. Featuring Rick Ross, the visual for "Hold On" showcases both rappers dropping knowledge on students about trying to survive their harsh environment.

"They praying for jail, but I mastered the pen, descended from kings, we at it again," Pusha raps in a classroom of young males. Rick Ross compliments Pusha's song content with an awesome verse over the sentimental production.

"I was pissing my shorts, having rich nigga thoughts, wish I had a pistol before all the friends I done fought," Ross spits, painting the picture of his prior lifestyle. The video is a great upgrade from Pusha's recent visuals, as they have been more on the darker side. "Hold On" is very vivid, taking on you a realistic trip through life on the streets.

For those that appreciate dark imagery, check out his previously released videos for "Pain" and "King Push," here on Zumic. My Name Is My Name is available on iTunes. 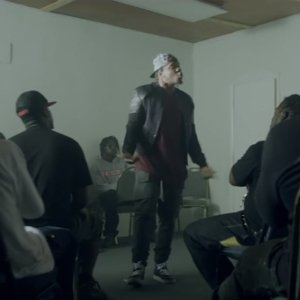 "On The Regular" - Meek Mill [YouTube Music Video]
Music East Coast Rap Hip Hop Meek Mill Rick Ross Official Music Video Philadelphia, PA
1
1365
Back to top
You must be logged in to upvote things.
Registration and login will only work if you allow cookies. Please check your settings and try again.